VisUI 0.6.0 released! This updates adds one new big widget, other small changes and bugfixes. Go here if you still don’t know what VisUI is.

Let’s start with the big one, a color picker! 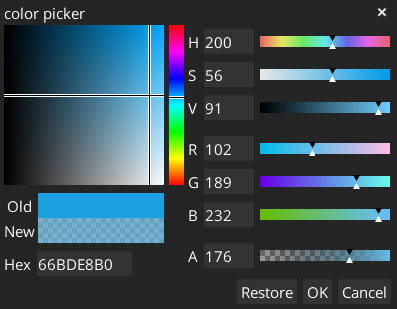 Now, that is next big widget after file chooser, I think that now you don’t have to use any Swing class if you are creating desktop application. Picker wiki page

I also added ColorUtils, class that allows to convert RGB to HSV color system and vice-versa.

VisUI.skin is now private, you have to use VisUI.getSkin() instead. Surprisingly, except that no other breaking changes.

You may wonder what is that new FormValidator method, it was to added only to improve UX, see VisEditor Devlog #2 for more details (Ctrl+F -> FormValidator improvements).

VisUI now have VERSION constant. Added some premade validators for VisValidableTextField. And updated to newest LibGDX 1.5.4.

Previous VisUI version fixed focus traversal, this version improves it a lot! Now focus won’t to go field that is not visible or if you are using field in modal window it won’t escacpe it to some other field in background, awesome thing in my opinion.

Added option dialog to DialogUtils, it can display dialogs with buttons like yes, no, cancel.