VisUI 0.5.1 has been released. If you still don’t know, VisUI is a flat-design skin and UI toolkit made for LibGDX scene2d.ui. This version adds two main new features and of course introduces other small changes, but let’s start with a change log:

Really nice feature in my option, especially useful for button that only has icon. Tooltips can contain any content and can be added to any actor, see VisUI wiki for more details on how to use it. 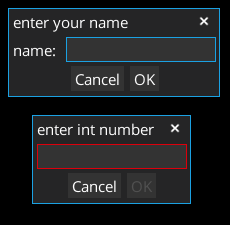 New methods in DialogUtils class that allows to display input dialogs, DialogUtils is becoming an equivalent to JOptionPane from Swing.

TableUtils was moved to util package, sorry for that, it just has to be done.

Worth mentioning is that I fixed moving to next TextField when TAB key has been pressed. It is kinda weird because that was already done in scene2d.ui but it was only setting keyboard focus for next field and that is not enough to focus next field. So fixing that was just changing one line to call my method focusField().

I think that I will add ColorChooser in next VisUI version, I’m not yet sure how I will do it though :D